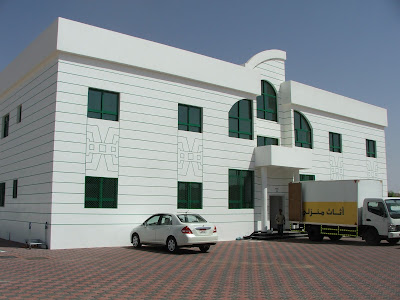 Welcome to Green Stripe (or officially Shuaibah District 31, Community 1, Street 21, Building 17) - our (and 13 other Cog staff's) new home since a week ago, and most of the reason for no blog posts for so long.

This is because I have been occupied full time helping David Ryan, the indefatigable and amazingly unflappable Cognition go-to guy in Al Ain, to get the apartments ready. This was urgent as the building was behind schedule and there was a queue of people waiting to move in, either from less-salubrious accommodation like the Pool (e.g. us), or various hotels where they had been put up at great expense, since arriving up to six weeks ago. I've been doing stuff like drilling holes to put up curtain rails (with no working aircond for the first week, when it was still really hot), and buying and distributing numerous chattels - it's amazing how much expense and labour goes into setting up a place like this. Not least among the benefits is that I have lost most of the half stone or more I put on in four days on our trip to Wales (see below).

More photos soon - since this one of Block A (ours) the carports have arrived and holes have been dug around most of the perimeter for palm trees, whose arrival should transform the place. We are the front top left of eight apartments, and there are six more apartments in Block B across the courtyard. There is tons more room than at the old Pool apartments, no swimming pool though (no great loss - I did have one brief swim, and would just like it known that it wasn't me who peed in it), nor a bidet (as one of the teachers said, we'll cope), but the shower doesn't make puddles in the bathroom doorway, and the bath is a proper size. The built-in aircond is a bit noisy though (ours has stopped working in the loungeroom, hopingly the only teething trouble we have, and not a panic situtation now that the temperature is down to about 35 in the day and 25 at night); I do almost miss the cosy galley-size kitchen and the funky cracks in the walls at the old place.

We are about 3km from the Pool, on the other side of Twam St (still just as far - 15km - from the town centre but handy for one of Ange's two schools) in a new economy-size (6km x 2km) suburb of mainly economy-size villas in various stages of construction. From our kitchen window we look across the street and a fenced-in pipeline to the beginnings of a landscaped park on the banks of the wadi. Though there is as usual no visible water in the wadi, there is green grass growing along our bit of it (I have spotted a dragonfly, and neighbours out for a walk heard frogs even!), probably due to irrigation outflow from the Palm Sports resort (= the Rugby Club) and the adjoining extensive grounds of the Sheikh's palace on the opposite bank. To complete the picture there are also power pylons growing along the wadi. Apartments on the other side of the building have a view of Jebel Hafeet (until the other two blocks get built at the back of the compound, but no sign of that yet), but we only have to go up to the nicely uncluttered roof (a communal barbecue may be bought soon) to gaze at it if we wish. There appear to be no camels in the immediate neighbourhood, just a rooster who crows all day.

Anyway, we appear to be quite settled at last - first time really since arriving in Doha in February - among a friendly community of Cognition colleagues, and have been going mad buying nice things to tart up the nest; Ange had a ball in Ikea on a recent visit to Abu Dhabi. We have even finally got a subscription to Showtime TV (can see NZ Rugby etc) and an account to deliver drinking water bottles, including a cool cooler/hot water dispenser. Always wanted one of those.

It was still Ramadan last time I blogged - here's a pic Ange got of needy workers being dispensed alms food outside a central Al Ain mosque. The season of fasting and charity is just a memory now, and we are back to such normality as exists here, with the shops closing at 10pm instead of 1.30 in the morning. 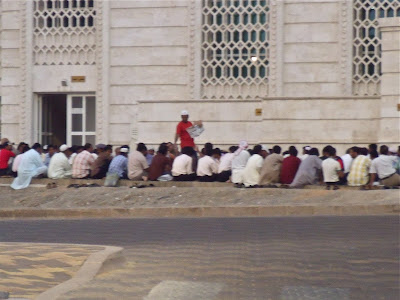 The end of Ramadan brings the Eid long weekend, and although it didn't turn out as hoped that the Sheikh would announce a change of date so that it would take in two weekends, we grabbed the chance of a four day raid on Swansea to catch up with Angela's relatives, especially her dad Bob who we hadn't seen for three years since he returned to Wales from NZ, as well as her brother Marc and family who I had never met.
Pausing only for the race-to-the-death-and-back-with-only-one-teabreak mission to rescue passports (as described in previous post), we hopped on Emirates once again at 3.45pm and by 7.30 (GMT) found ourselves trapped in ye good olde Gatwick foreign passport queue (having both neglected to renew our UK documents). It wouldn't have been so bad having to stand in the sweltering heat (really, we picked a late September heatwave) for 45 minutes, swapping "Welcome to Britain" pleasantries with more or less patient Indian and South African fellow arrivals, if we hadn't had to watch a twice-as-big UK/EU passports queue go through first, while no stamp-wielders could be found for us, apparently.

Never mind, Marc and son Gareth were still faithfully waiting for us, having driven four hours from Swansea, and by 2 a.m. we gladly fell into bed at the boutique Glyn Clydach hotel, idyllically set among woods not a mile from Marc's house in Skewen on the outskirts of Neath. 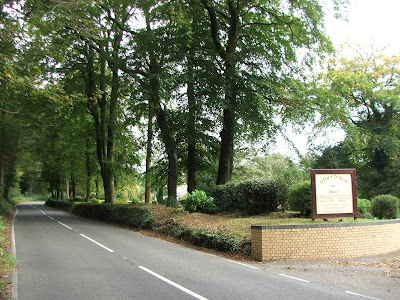 No rest for the prodigals though - despite intended sleep-ins, we were up at sparrowproverbial to make the most of our limited time, to be greeted by this enchanting view from our room, and by a proper Welsh (can't say English now can we boyo, but it was the same) brekkie, with proper bacon.

Then a brisk walk (not enough to work off much of the breakfast) along picture-postcard lanes to Marc and Yvonne's. 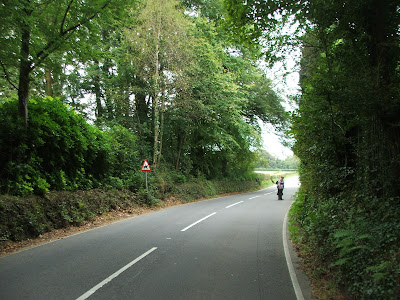 As I said before, Bob's looking good 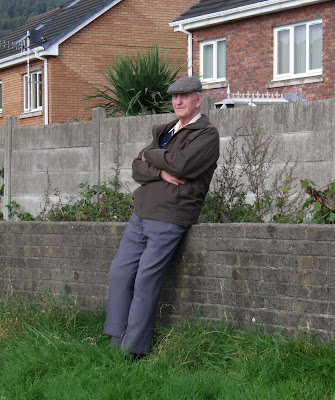 and Marc (sorry no photo of Yvonne) and extended family were cheery hosts. 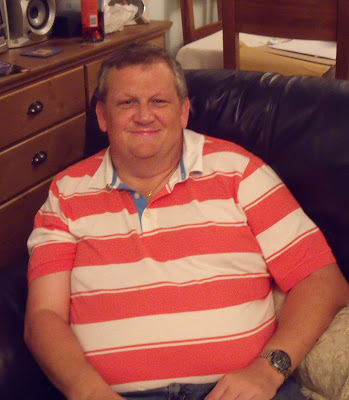 I met a vast number of jolly charming cousins and friends and was made to feel one of the family from the start, with only a gentle but constant smattering of perplexity over whether I counted as a kiwi or an Englishman, and what was I actually saying in my indefinable accent. The only one missing was sadly Bryn the dog, who passed away aged 14 the day before we arrived.
As already reported, I made it to two rugby games - Ospreys v Leinster, featuring Jerry Collins getting sent off (among other unpopular reffing decisions) and a general shaking of heads at the state of things, but a jolly rousing occasion anyway; and more pleasingly, Skewen (in black and yellow, with Ange's other nephew David usefully coming off the bench for most of the second half) walking all over I forget who (but they were big old boyos to be sure). 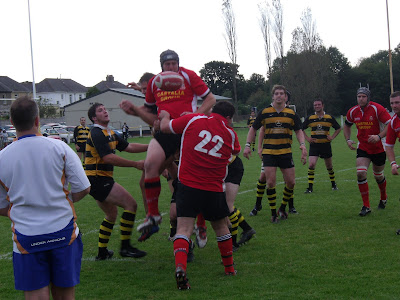 A highlight was getting to meet Ange's beloved ex-mother-in-law Brenda, just turned 90 and bright as a button after recovering from some nasty health problems in the last year or so, and overjoyed to have a surprise visit. 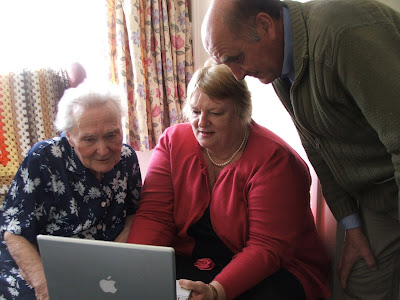 We met up with Ange's ex, David Penharwood, who took the three of us on a very pleasant all day tour of Swansea and some of its more picturesque environs. This is the view from the point at Mumbles back along the bay to the city; 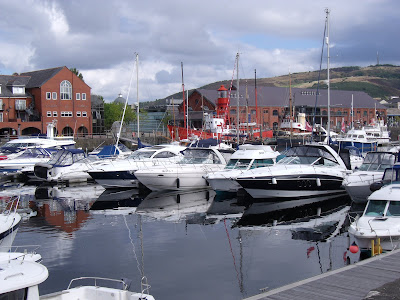 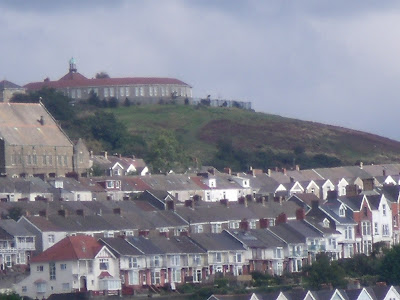 and a reminder that Britain and the Gulf are not so far apart any more. 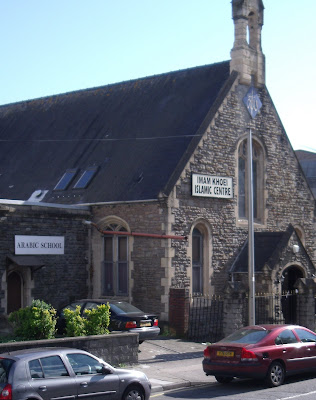 Other highlights were visits to Neath and Swansea markets (I got some spare keys cut - in Wales you don't need a police letter of authority for that...) and a proper-size Marks & Sparks; a full-on Saturday night barbecue at Marc and Yvonne's, a family dinner at our hotel; the hot dry weather; and much catching up far into the night. Sleep was in short supply, but the eating never stopped it seemed.

But the best highlight was the walk from hotel to house - as well as the road, we had the choice of a woodland path that could have been a hundred miles from suburbia 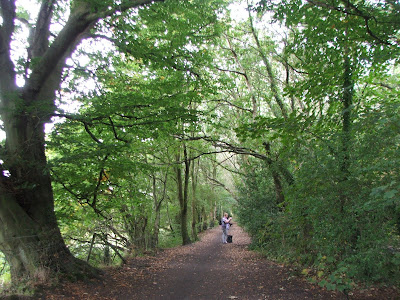 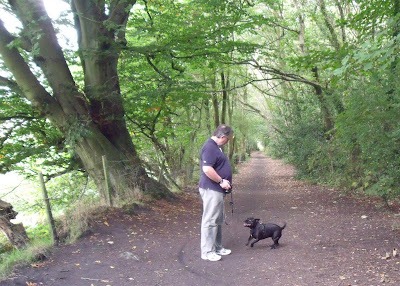 The nearby scarp of The Drum beckoned, but there may need to be a lot more fitness walking before we tackle it. 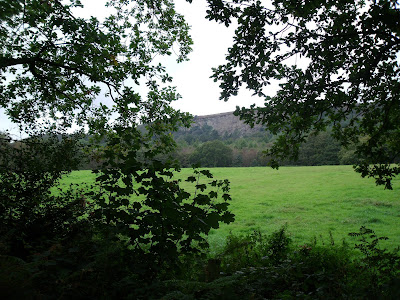 The best of the blackberry season was past, but a few good ones were left. 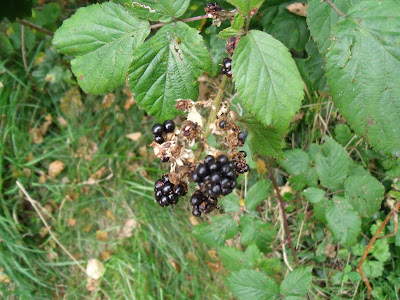 I was hooked, will be back for a longer look soon for sure. 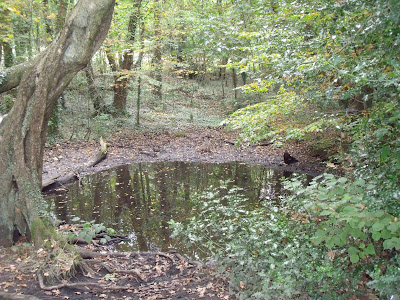 But all too soon, etc...; driving back to Gatwick for 10 a.m. takeoff meant a 3 a.m. start for Marc, Gareth and us on Tuesday, pausing only for one more bacon and eggs feed at a motorway caff, and a jar of Harrods marmalade from duty free (all gone now). Advisory: front row seats, chosen for the spacious kneeroom, have (at least on Emirates 777s) fixed armrests, and are narrow and unsuitable for XXL bums. We survived.

With the 3 hour time lag, and the pre-arranged pickup of Ange's colleague Alison who had been to Paris (at Dubai terminal one, which is having a metro station built above it and therefore, due to restricted parking and access, necessitates an endless insane traffic merry-go-round and a crowded wait outside the doors in the heat) we finally saw the friendly lights of Jebel Hafeet at about 1.30 a.m.
With luck in the next week or so I'll get a few more pix sorted for an overdue Al Ain travelogue of sorts; meanwhile here's a somewhat short vid (I didn't realise the camera was on video setting, then the battery died) of the junior twister that was right there about to cross the road and blow some Indian workers' hats off as I drove up Twam St the other day.

We have seen several of these - not sure if it's a seasonal thing, but they are fun to watch. Other alternatives to shopping-mall entertainment coming up are the much-hyped Abu Dhabi F1 GP, which we will have to watch live on Arabic TV as it's all booked out, and NZ v Pakistan 20-20, which might be a fun day out - if there's time in between our own nesting activities and sorting out other residents' missing microwaves and wineglasses etc, and the odd rooftop party.
Posted by tonyH at 07:31