In Doha we lived in Madinat Khalifa South - a.k.a. District 34. Here we live in 34th Street. So far, so spooky. Well, there are numerous 34th Streets, most districts of Al Ain seem to run to a 34th. Ours is the one in Al Khalidiyya (Com 3), which is part of Al Agabiyya (Dist 30). All this info is helpfully included on the street signs. Not that the average cab driver will find it all that helpful - you need to be ready to give running navigation instructions. The average Emirati or Qatari (descended, of course, from a people who were master navigators of the trackless desert), just knows how to get to where he needs to go, without recourse to a mental map cluttered with numbers and names. Last week I helped Ange's friend and ex-colleague Una, recently arrived from NZ to work for an Emirati school, to collect her personal effects cargo from a freight depot in town. We spent a hit-and-miss half hour looking for the place, finally happened upon it, and later asked the proprietor what was the name of the street. He scratched his head, then said "I have been in this shop 25 years and I still don't know!"
Houses in Al Ain do have numbers (just like Doha), but there appears to be little danger of a postman service magically starting up any year soon. I also had a mini-adventure trying to post a letter to NZ - not quite the epic that posting a parcel in Doha turned into, but quite enough on a hot morning thank you. It involved the queueing-by-ticket system - yes! just to post a letter! - in the city's one and only Post Office, being in disarray due to a lack of power for the ticket machine, and also for the Eftpos, which therefore necessitated backtracking to find a mastercard-friendly ATM. All this in Ramadan, so no recourse to the water bottle in public (although it should be noted that the trekking involved was made much easier by Al Ain town centre's superior pedestrian-friendliness, just like Abu Dhabi, with adequate sidewalks, reliable pedestrian crossing lights, and even underpasses - Doha take note). Eventually the letter was dispatched at an agreed 11 Dirhams, despite erratic readings on the scales (variously 11, 17 and 47 Dirhams, though the weight read zero grams each time...).

So if you want directions to our place (surprise visitors always welcome), and you have your direction-finding duck with you, they are as follows: after the long tree-lined drive from Abu Dhabi (2 hours) or towards Abu Dhabi from Al Ain centre (20 minutes), you should come to Twam St, which you should follow for several blocks (i.e. roundabouts) until you cross a bridge over the wadi. There are, by my count (from the map - I haven't laboriously visited them all yet, but it would make a good familiarisation exercise, so watch out for the coming blog post), between 25 and 31 main-road bridges over dry wadis scattered around this town, most of them stylishly decorated to rival the roundabouts and underpasses. Water in the wadis is reputed to be maybe a once or twice a decade treat, which I hope to stay long enough to see. Meanwhile they all look something like this (our local one you have just crossed over). 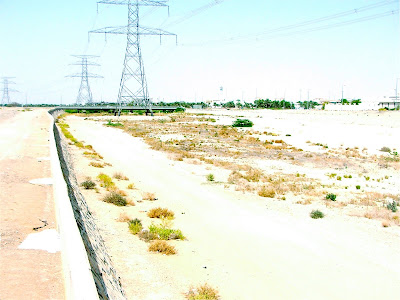 I think the camera was on the wrong setting, but it does give an idea of the washed-out (!) colours in the noonday heat. At dusk it looks a bit more inviting, you can almost hear the eels and kingfishers splashing about if you stare at the picture with eyes half-closed, no? 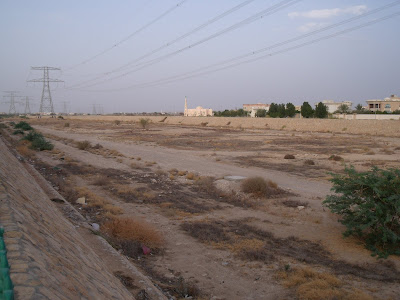 There's a nice curry restaurant on the bank - you can relax under the date palms wihle waiting for your takeaways, like me and our neighbour Joss, who introduced us to it and lots of other useful local knowledge. To keep you cool they have big fans which have a clever water misting device attached. 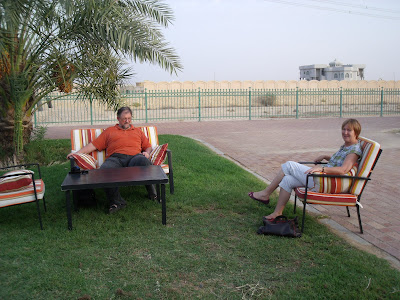 Anyway, you make a left at the next roundabout (before you get to the dunes)

and you find yourself in a district of moderately grandiose villas, many still under construction 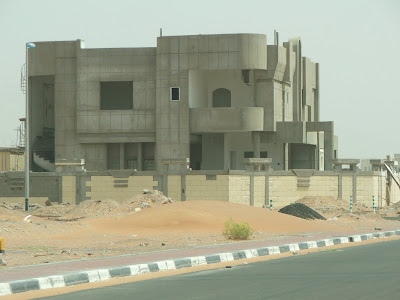 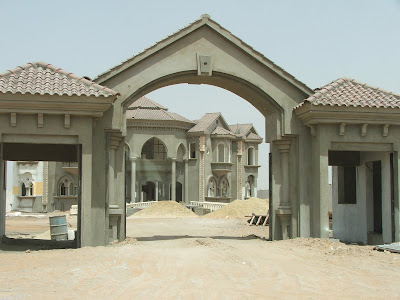 These are by no means the grandest houses in Al Ain (more photos to come as we discover the standout examples) but are I believe the sort of thing the government has just announced plans to provide (free, including land) 17,000 more of (here and in Abu Dhabi) to Emirati nationals who apply for them. Four bedrooms, expandable to seven if required. 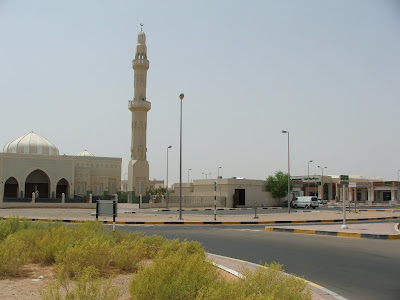 and a few shops, including tailor, hair saloon, takeaways, and a proper supermarket, plus a solitary Indian corner shop, all about 1km from our place. 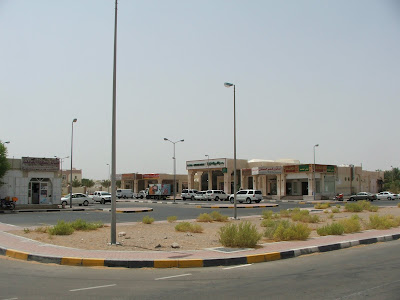 I test-walked it the second day we were here, stupidly forgetting to replace my jandals with shoes. The burning of the soles of my feet didn't really become undeniable until I was more than halfway there, so nothing for it but to hobble on. I only got rid of the blisters last week. Anyway, got a car now so no worries. This is one of the blameworthy streets. 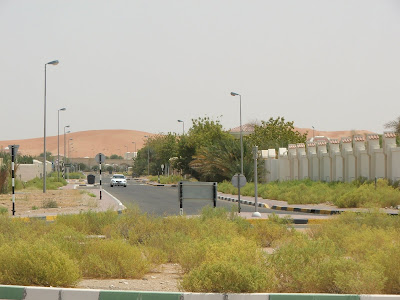 So you've hung a right at the mosque, found 34th, and the red umbrellas and green massif (only apartment building around here, at about 70 apartments it dwarfs even the biggest neighbouring villas, but not half as splendid) of the Alfilah Building (known to Cognition as The Pool Apartments, or Colditz to the more cynical among us - I don't necessarily share the sentiment) finally heave into view. 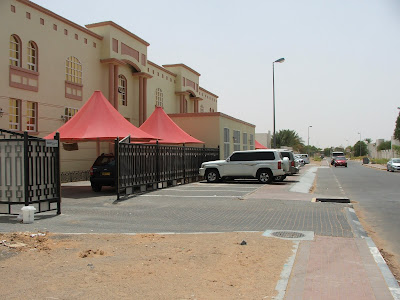 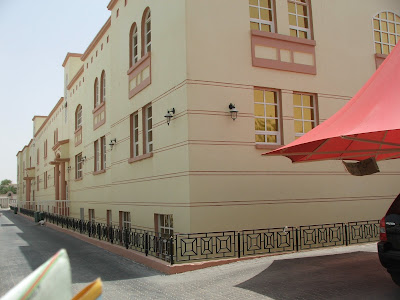 Angela and our neighbour Sue (also ex-Doha Gharrafa) welcome you to the airy (rather warm) halls within. 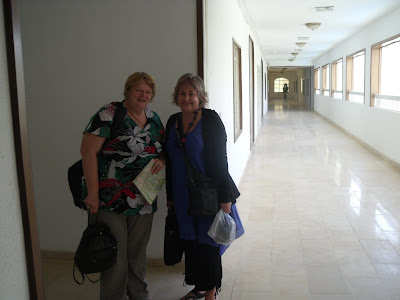 See, there really is a pool. Confession: we've put off trying it out, first because it needed cleaning, but now that has been seen to, our current excuse is we're waiting for the weather (and the water) to cool down a bit. Will brave it soon, just so I can post a report from poolside). 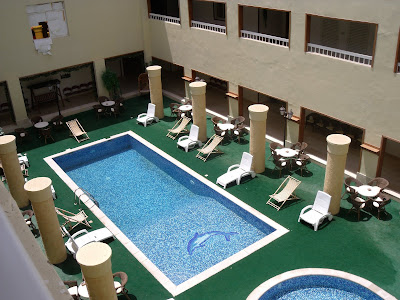 The interior of our apartment also shall remain cloaked in mystery for now, at least until we get our stuff from Doha (any day now we hope - was taken to freight agent there last Sunday) and jolly it up a bit. The space is nothing special, but for me it's totally liveable (less to clean than some of the more unnecessarily-spacious alternatives we have visited). We will try to decorate sensitively with due regard for the cracks in the walls, which none of the neighbouring apartments I have visited can match for length, breadth or convolutions (the building is reportedly one year old).

Meanwhile, until they can receive the attention they deserve (from decorator, photographer, plasterer or mason, insha'allah), here are some nice views out our loungeroom window (faces approx eastwards). Yep, we do have (on not-too-hazy days at least) a reasonable view if you crane your head, of about half of Jebel Hafeet, second highest mountain in the UAE at 4000ft, one of Al Ain's proudest tourist attractions, only about 10km from here and definitely deserving of its own blog post - watch out for it. Also note that unlike the foregoing photos, I have accidentally managed to include quite a lot of the greenery for which Al Ain is justly renowned. This oversight will be further remedied in future posts. 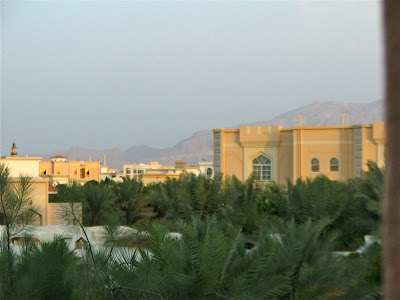 The mountain is truly a sight at night when the summit road (3 lanes and streetlit for all of its 15km) really stands out (actually taken from a sand dune vantage point 5 minutes walk from here). 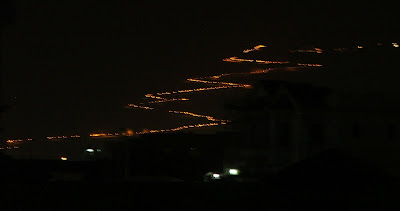 And if you crane the other way, there are the camels (already seen in wide angle at the top of this page). 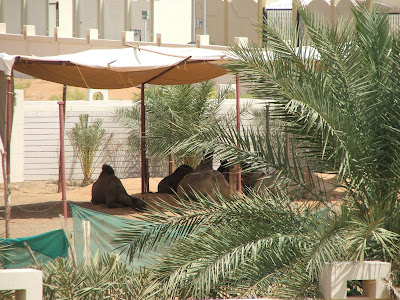 There are lots of camels in and around the town - best viewed at the extensive livestock souqs to be found behind the posh Bawadi Mall just a few km out of town towards the mountain - also another post in the making. 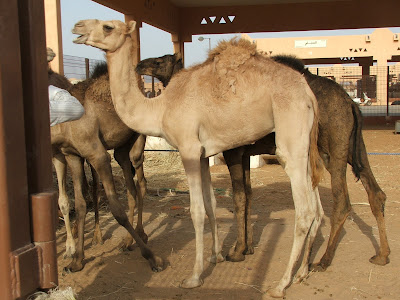 Meanwhile, it's ma'asalaama from me and her. 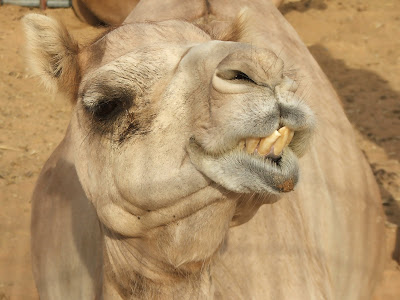