Mouse has been a bit anarchic again today, sometimes ignoring all clicks, then suddenly dragging and dropping things all by itself; it managed to post this post without any content while my back was turned, but we may now have reached an understanding (I brushed some crumbs off the tablecloth - will get that dam desk soon), so thanks for your (!) patience.

In fact, all sorts of things can make you a bit dizzy here - just looking at the buildings is enough for some people; 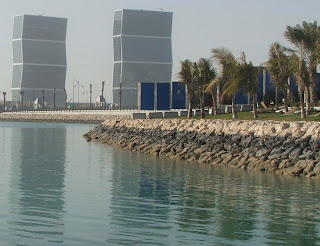 Or trying to cross the road - sometimes even the Indians just give up... 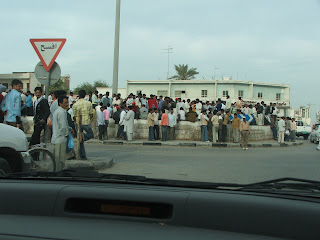 Although you'd be mad to even try here: http://www.youtube.com/watch?v=dD8SuZnHfho (I reckon there's an even worse one, known as "no-rules intersection", just few blocks from here - will get the video cam out one night).

But for me a week or two ago, and now Ange this weekend, it was the inevitable ills that beset hard-working new expat consultants (or in my case, houseboys without the sense to resist the charms of the Delicious Samoosa shop round the corner). Debilitated respectively by tummy bug and flu, and encouraged by colleagues and neighbours (and thanks to medical insurance), we were driven to discover the reality behind the ubiquitous banners and billboards, and Experience Love at Al Ahli hospital. 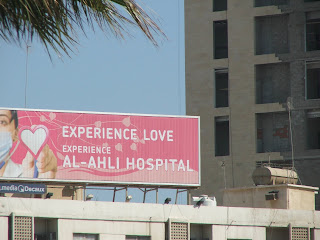 This is one of half a dozen new medical centres opening around Doha, and going by the look of the exterior of some of the others, may not even be the ritziest. Never mind, the interior of Al Ahli is an experience, and the Love isn't to be sneezed at neither. I was seen by a very personable lady Arab doctor who put me on an IV drip without ado; the nurse even brought me something to read when I asked (The American Journal of Cardiology, who could ask for a more sleep-inducing publication?); then sent home with the requisite antibiotics and electrolytes from the hospital pharmacy, (pausing only to hand in the prescribed IV fluid at the clinic counter to top up their supply, a logical system I suppose). Ange struck a rather busier time and had to wait two hours to be seen, and the queue at the pharmacy was a bit of a scrum, but the waiting room couches are very comfortable, and there are plenty of Arabic magazines to gaze at.

Meanwhile life goes on in the big hospital, literally all around you - a triangular five-storey atrium with ward corridors looking down, and on the ground floor all the information desks, registration counters, clinics, genteel waiting spaces and ivied fountains you might expect. Not to mention an upmarket cafe, a chocolatier where you could buy a presentation basket the size and shape of a small pram to celebrate the new arrival; and a gentleman in an immaculate thobe, bearing a silver tray and coffee pot to offer refreshment to any and all those reclining on the couches (though I was in no condition to accept).

Porters push hotel-style trolleys (the ones with an arched rack to hang things on) in and out of lifts; as we waited at the front entrance for the driver to come, another patient was being collected in the family Land Cruiser - in went several large suitcases, half a florist's daily output, the inevitable choccy basket, etc; but the porters had considerable difficulty shoehorning the gilt tea-trolley in on top. Insurance might not pay for all that (on top of the fees, which don't muck about) should we ever need to be admitted.

I was going to take some photos, though not sure if snapping away even in the grand atmoshere of the atrium is quite the done thing, but sensibly the camera batteries chose to die just then (didn't see a little shop anywhere on the premises where you could buy such supplies); sooner or later when we have transport, must include at least some exterior shots in the gallery of fine Doha buildings that is itching to be compiled.

Meanwhile, alternative accommodation is available if you're a space-minded gal: 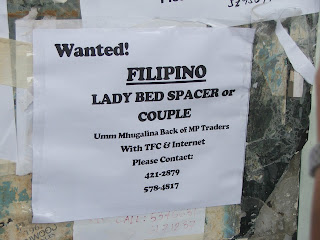 and as you're all waiting to see if there was anything to experience, that'll be 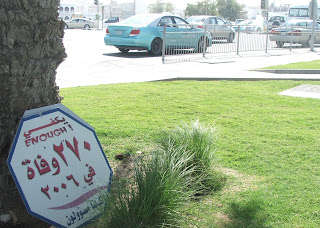 Back to nursing duties, then (we are nearly better, thanks).