Anzac Day in Doha. We had thought we should turn out for the dawn parade organised by kiwi and aussie expats, but after another week of 5am starts, sleep got the better of us. Sorry, we promise to try to be more patriotic next year. As it did turn out, we were fortunate to catch a local celebration of a history no less revered.
There were other half-formed plans for the day: having visited the camel racing track (at Al Shehaniyah, 40km west along the Dukhan road that continues on from Khalifa St) twice in the previous two weeks, at times we were unreliably informed there would be some racing to see, we were still sort of keen to make it to the final of the Emir's Cup event, which was definitely today according to two out of three sources.

Both previous visits involved numerous phone calls to various numbers either from the guidebooks, or suggested by the people at those numbers, with conflicting and inconclusive results; and an eventual resolve to just get on out there and see what's happening. This in turn involved rounding up various apartment dwellers who had expressed an interest in going, but either slept in or got roped into other weekend expeditions. The result was arriving like typical expats too late in the day, as far as we could tell, for any racing that might have been on - a few teams training was all there was to be seen. 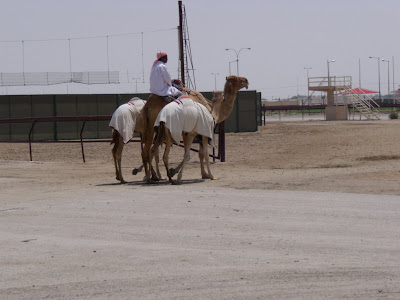 On the first trip we were able to drive right inside the track and around the dusty road that follows the inner fence of the approx 5km circuit, on which owners follow their steeds in 4wheel drives during races, operating the robot jockeys by radio. 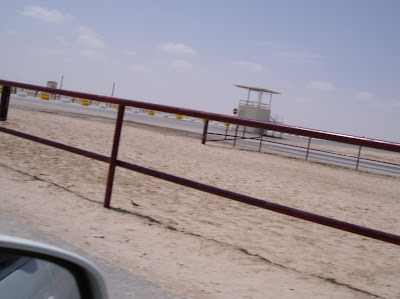 Until a few years ago young boys were used as jockeys, but the Emir has now outlawed this dangerous exploitation and instead there are the robots with mechanical whips like these. 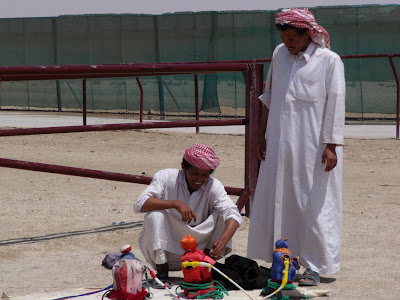 So, having hooned around the track egging on imaginary favourites, and passed a jolly half hour with the friendly camel wranglers, we left for greener pastures as the last few gallopers headed back to the corral past the empty grandstand. 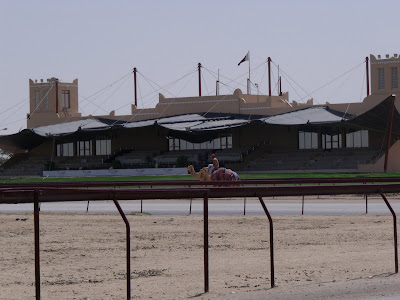 On the second occasion there were security guards on the gate to the inside track area, who had no clear word as to whether there would be any more racing that day ("Come back Monday 6am" - yeah right). A frightfully English family was determinedly enjoying a jolly picnic in the (once again otherwise completely empty) grandstand, a lone beast sprinted down the home straight and into the holding yard to be deftly caught by a handler, and in the carpark by the winning post, a hundred or more brand new Land Cruisers - the prizes - waited in rows. We couldn't quite manage Monday 6am, but it's in the 'get up early next year' file alongside the Anzac thing.

Meanwhile, what could be more enticing for an aimless Anzac afternoon than spot of powerboat grand prix? 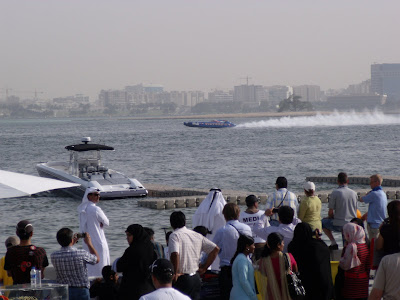 We battled the traffic, found ourselves a spot among the limos in the Sheraton car park, and trekked down to the corniche and right into the nice shady free grandstand (with esky of free iced water bottles parked in every aisle) and a perfect view of all the action on most of the approx 12km course around Doha bay. A dozen totally insane boats, twenty-one laps of pure noise in the heat of the afternoon, choppers doing low passes filming the race, you couldn't help getting caught up - especially with the likes of kiwi throttleman Peter "Muddy" McGrath of the Maritimo Australia team to barrack for (they came nowhere though). 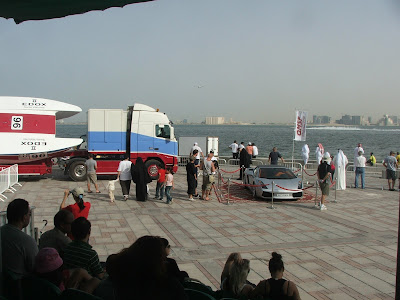 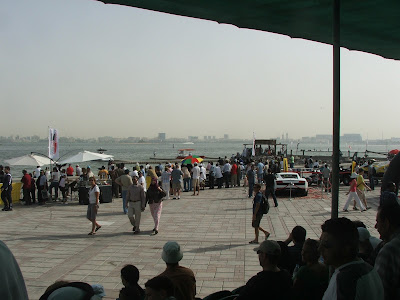 This is Qatar 96, which came in second, 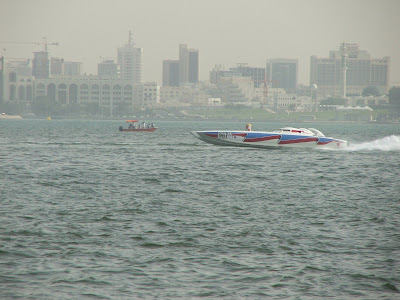 behind Fazza from Dubai. This was only round one of the world powerboat championship, so there is unfinished business out there on the water. 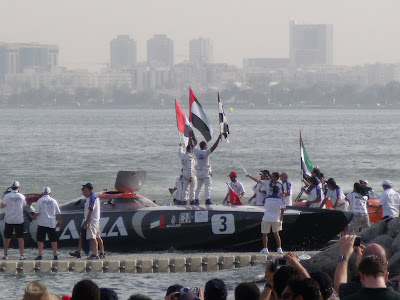 After a brief and very civilised winners' presentation (no champagne spraying here!), 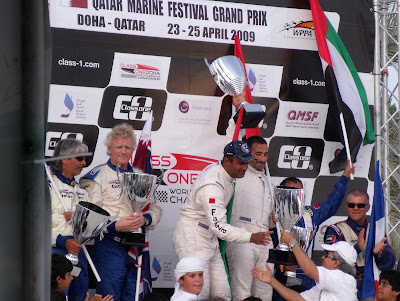 that appeared to be it. We wandered back past the bouncy castles and team transports and into the other, historical, side of the Qatar Marine Festival. Up till very recently, Qataris eked out a subsistence as fishermen and pearl divers. With the advent of petrochemical revenues in the 50s and of cheap cultured pearls a decade or two later, everything changed. But many of the old pearl divers are still around, and here were a couple of them, showing us how it used to be. Nancy, Angela and Morag got themselves ringside seats. 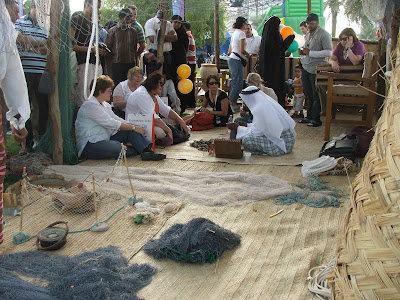 I'm sorry I didn't get the old guy's name, but by the end of the captivating session he was a friend of us all. 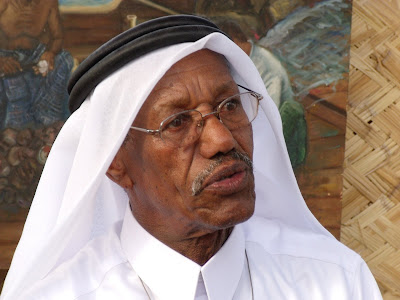 See here the net bag (al deyeen), hung round the diver's neck to collect the oysters; 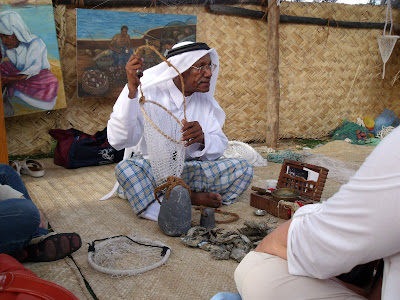 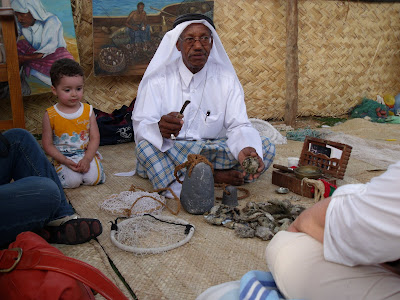 and the stone weight (al kher), released by the diver when he achieved the required depth. 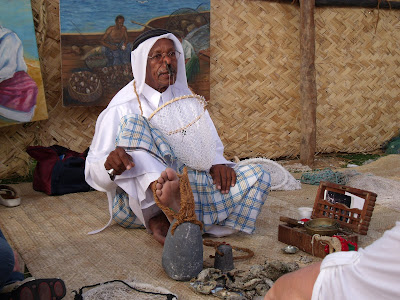 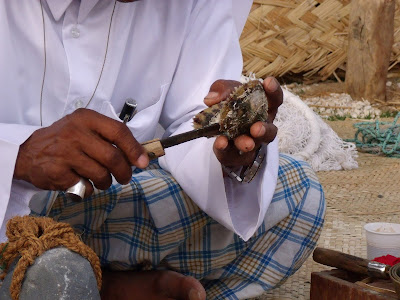 Meanwhile, his mate alongside kept on weaving his net; 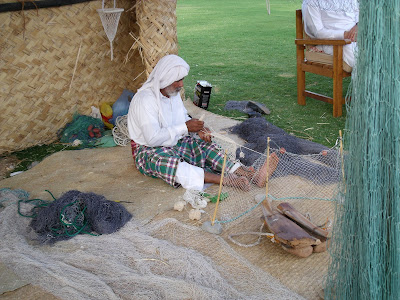 and over beyond the nearby carpet square something else was happening. A group of men gathered, a drumbeat started up 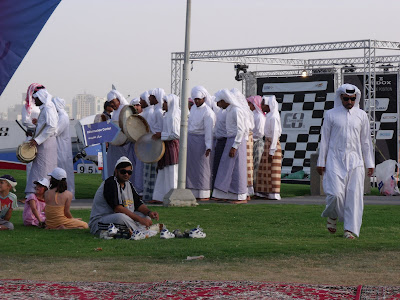 and dudes ran around setting up mikes and a length of rope. 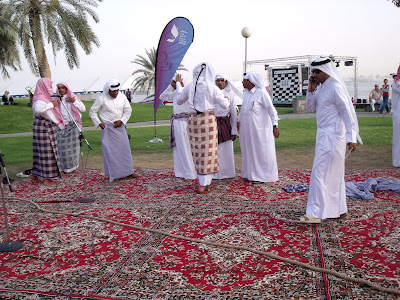 Then a procession wound its way onto the carpet 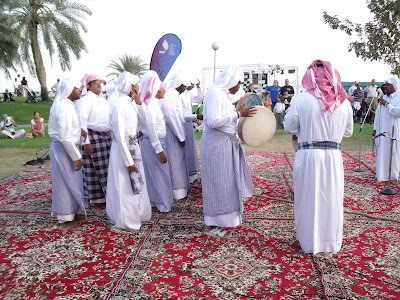 and the song-and-dance began. That's the singer standing at right holding the mike. 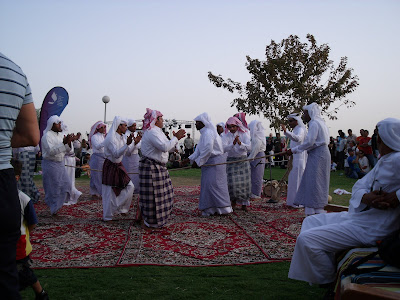 It went on for a good ten minutes, sometimes sitting, sometimes soloing, obviously telling a story. This is just one chapter (watch for the guy leaping near the end):

We asked the old pearl diver what it was all about. Yes, in the video above they are paddling the boat. There were tears in his eyes. 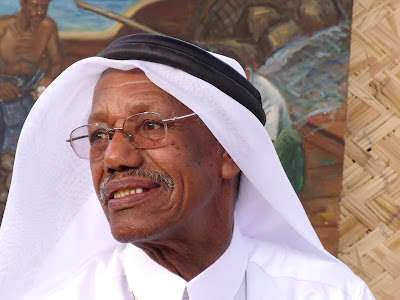 He got up for a closer look, stood lost on thought for a while, then got out the smallest digital camera I ever saw and was snapping away with the rest of us. 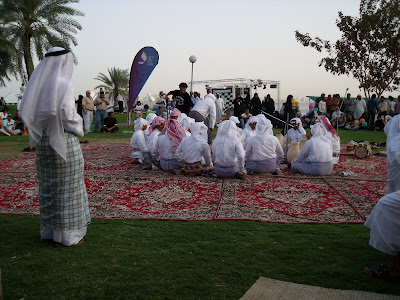 Then he was back on the mat again showing the kids his trade, 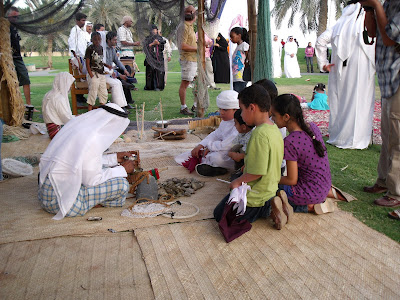 while the West Bay towers looked on like curious giants. 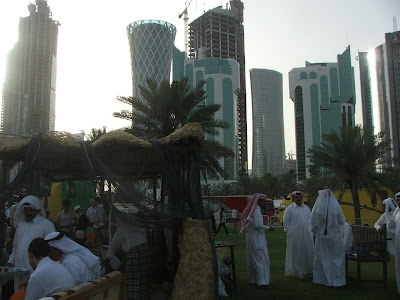 This guy and his mates offered us Arabian coffee and conversation, 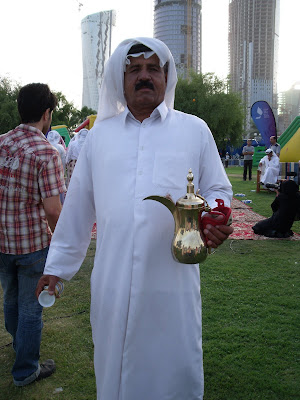 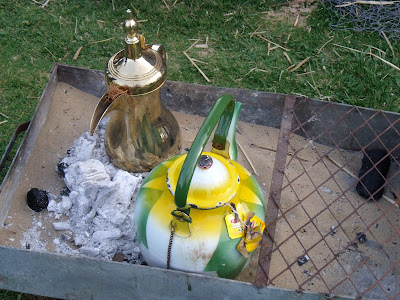 and the sun set on what Nancy rightly called a serendipitous day, 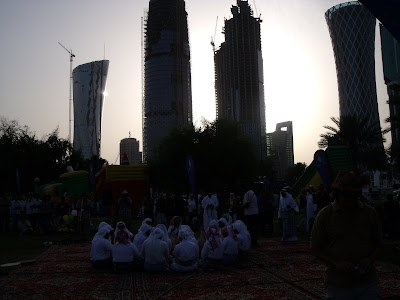 which however wasn't quite over yet - we wandered back to the Sheraton and inside its stunning pyramidal atrium for shopping and more coffee, then high tailed it down to the gold souqs to order some bling, but that has to be another story, eh.